The founder of ‘The Spanish Ascot’ has revealed how she was inspired to create her own version of the horse race after falling in love with English horse-racing.

Ariadna Vilata, 40, from the Pyrenees, said her fascination with races like Ascot and Epsom inspired her to launch her own event in Spain.

She founded Hats and Horses in 2017, and admitted she was stunned to welcome almost 1,000 people to the event in Menorca – including members of European royal families.

The event, which has relocated in its third year to Mallorca, sees English and Spanish cultures blending for the luxurious horse race. 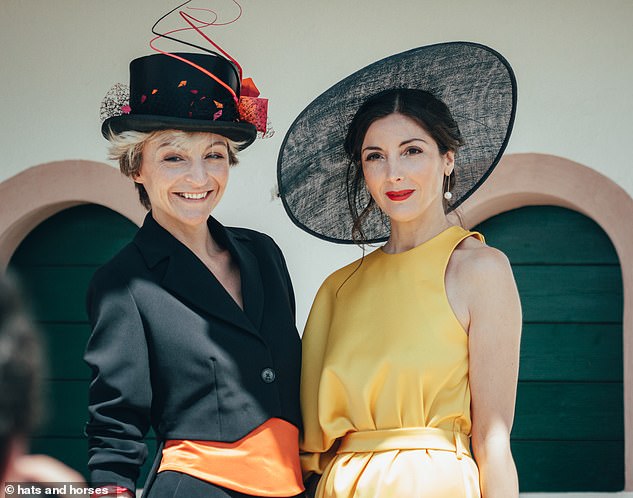 Ariadna Vilata, 40, from the Pyrenees, fell in love with English culture before launching her own version of Ascot in the Balearic Islands (pictured, right, in the first year of the event) 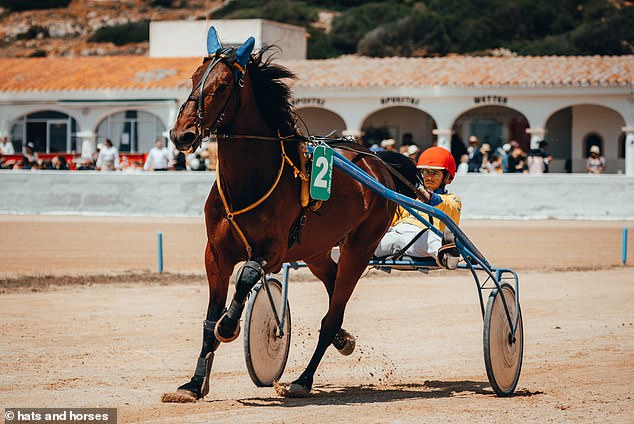 The founder said she tried to incorporate English and Spanish elements at the event, which sees jockeys compete in the tradition of ‘trotting’ 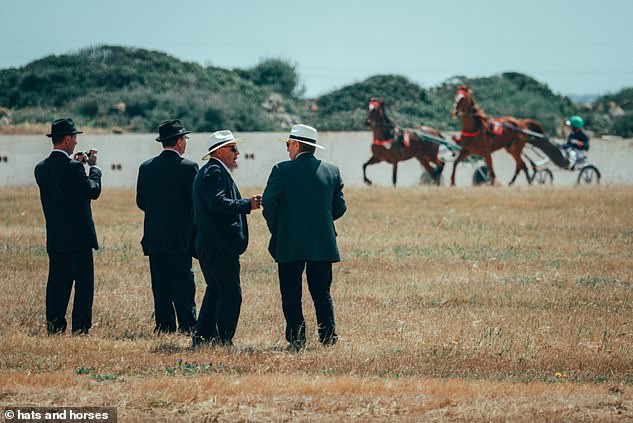 Despite living in Menorca, Ariadna told how she fell in love with the English culture shortly after she met her partner David, six years ago.

‘I always feel as though David is more relaxed in England, and I also find myself feeling at home,’ she explained.

‘I see him happier with his parents, which makes me love more the country where he was born and raised.’

She added: ‘I also find lots of English traditions very similar to my village ones. Food, lifestyle…there are many things in common. I find myself feeling at home there too.’ 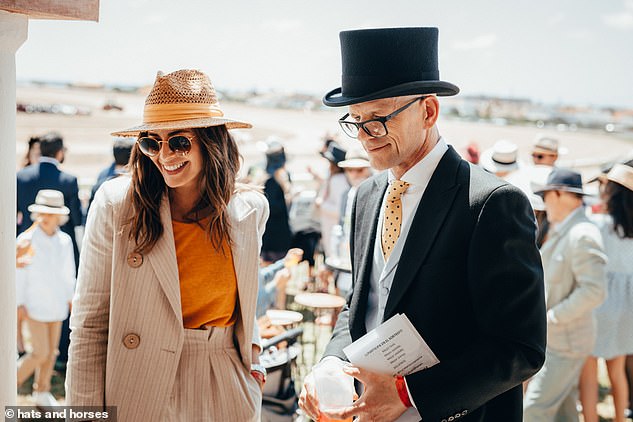 The horse race, which is about to celebrate its third event at the end of October, encourages guests to dress up in formal clothing like Ascot 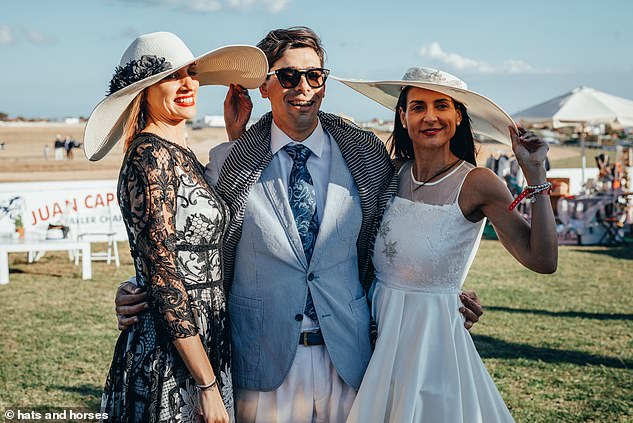 Ariadna said she was determined the event, which is set to be hosted in Mallorca for the first time next weekend, would have a ‘relaxed luxury’ feel to it

‘I have been very lucky meeting people there, everybody is very kind and makes me feel very welcome.’

Trotting is a form of racing in which the jockey sits in a small cart behind the horse and must prevent the horse from breaking into a gallop.

In a similar way to the British traditional horse race, bets are often taken on the winner.

It has been popular in Majorca and Menorca for at least 200 years.

Ariadna had long been fascinated with horse racing events, like Epsom, Goodwood and Ascot, and felt inspired by Menorca’s own hippodromes and unique type of horse race – trotting.

And in May 2017, having observed the ‘relaxed luxury’ of the horse races from afar, she decided to take the plunge and launch her own event in Menorca.

Having spoken to the Menorcan tourist board, hotels and hippodrome to organise the event, Ariadna said she started to feel nervous.

‘The first year was like a big “question mark,” she revealed. ‘Nobody had any idea about what we were trying to do.’

‘I had in my mind the idea of a UK Racing event very clearly but nobody was sure if people would arrive well dressed for the event.’

But Ariadna said she was shocked by the success of the event, saying: ‘To my surprise people were amazing.’ 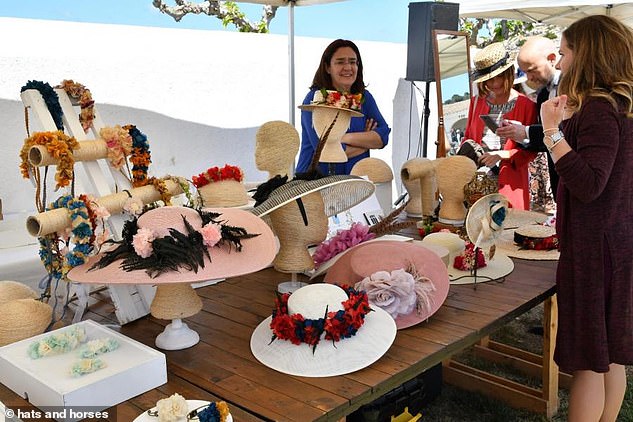 The dress code for Ariadna’s event is similar to Ascot’s, with guests encouraged to wear hats for the race

Jockeys race in the Spanish tradition of ‘trotting’, which sees them sit in a small carriage behind the horse and be pulled along at speed 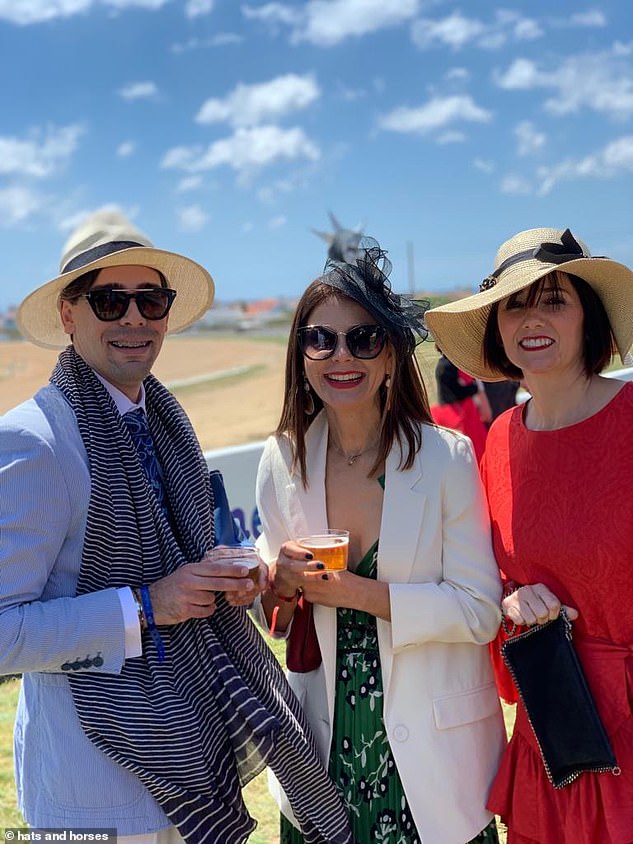 Ariadna told how she was astonished when the first year of the event saw 1,000 attendees (pictured, guests enjoy the sun at the 2017 race) 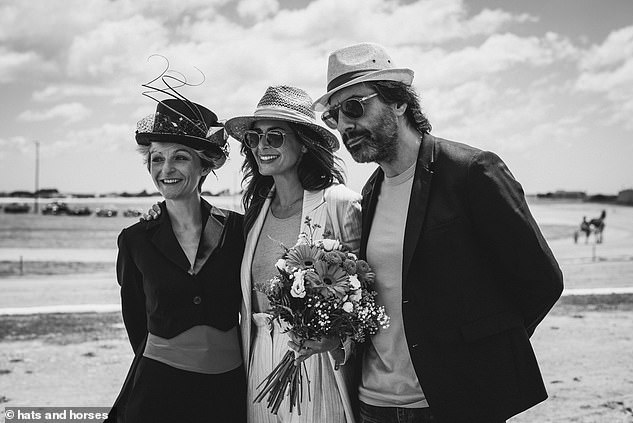 Ariadna revealed she was ‘overwhelmed’ by the success of Hats and Horse’s first year, and was determined it should continue (pictured, left, with guests)

She revealed: ‘The Mahon Hippodrome was unrecognisable for the first year, full of colour, hats and fun. We had nearly 1000 people there.’

Spanish model and actress Ana Milán and European royals including Prince Boris of Bulgaria were among the attendees.

But she acknowledged it hadn’t been easy to get locals to adapt the ‘Ascot’ style dress code.

‘In the first year, men were a little bit shy,’ she said. ‘But the English groups bring the full dress code which helps show the locals what to wear.’ 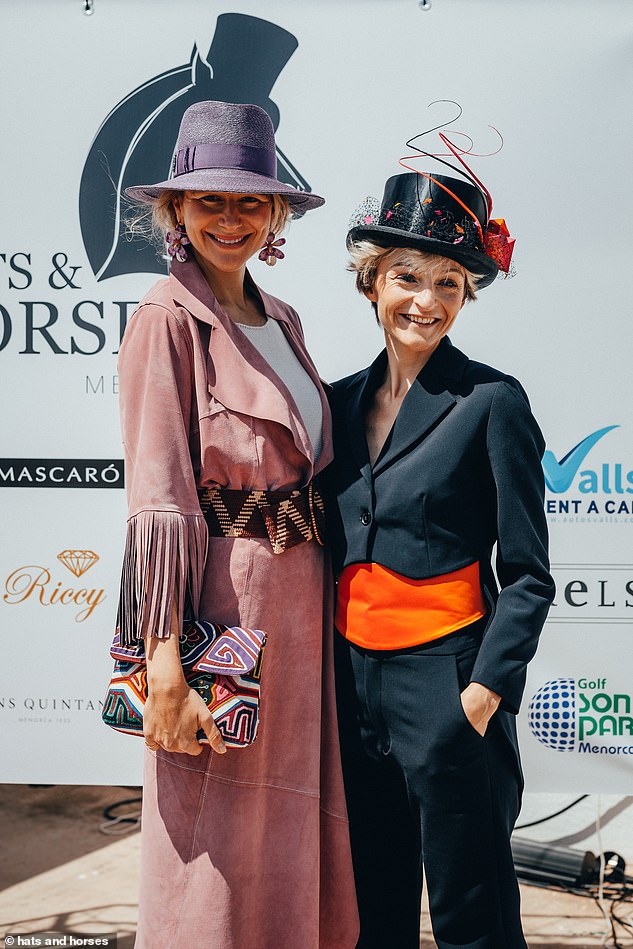 Ariadna said the Hippodrome was ‘unrecognisable’ for the first year, with the founder suggesting it was ‘full of colour, hats and fun’ (pictured right, with an attendee) 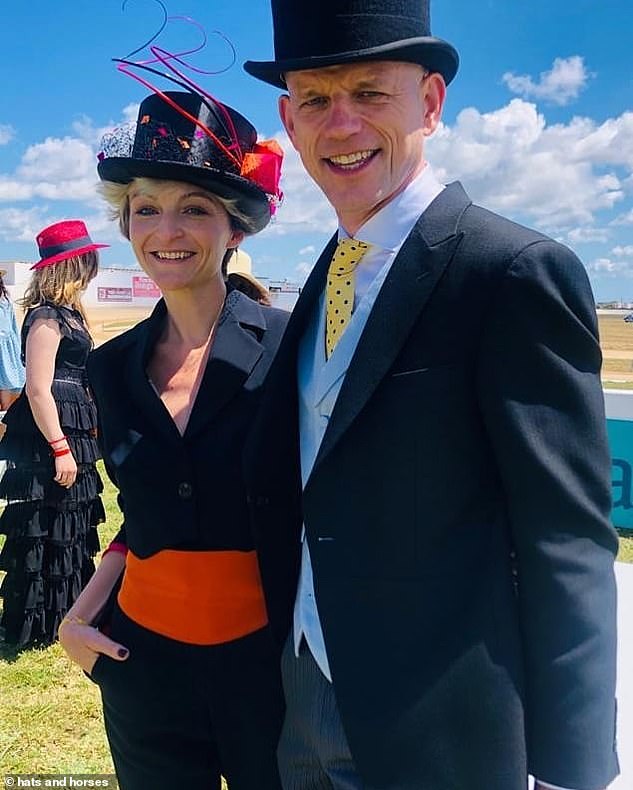 Ariadna told how she’d been inspired to found the horse racing event after falling in love with an Englishman (pictured, with her partner David at the event)

Months later, she visited Ascot for the first time, and admitted she was completely in awe of the occasion.

She explained: ‘At the races in England you can feel the incredible vibe of the excitement of the hooves thundering past, as you’re dressed impeccably with a glass of Champagne in your hand. What could be better?’

Recalling the event, she said the ‘ambiance and dress code’ had inspired her to make her own event even bigger and better the following year.

She went on: ‘It is amazing to see people well dressed, excited to arrive there, going down from the car, showing off their outfit, listening to live music and having fun.’ 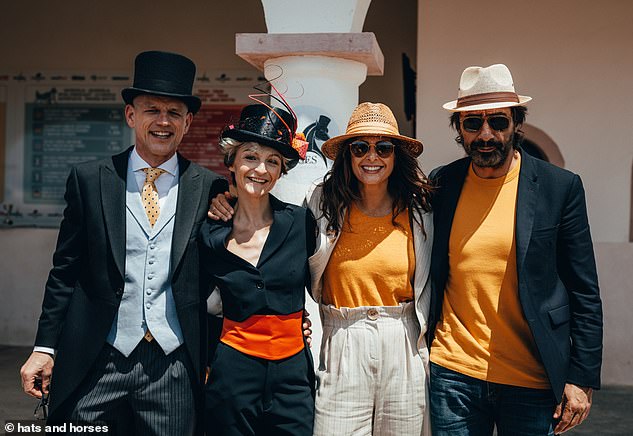 Ariadna said the event ‘expressed it’s own personality’ and blended Spanish and English customs (pictured, with her partner David, left) 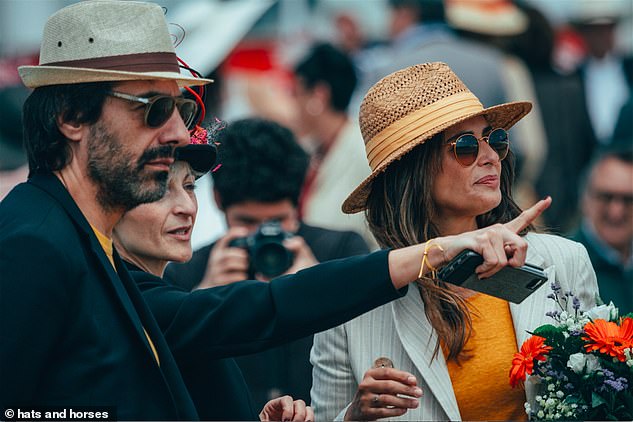 Ariadna, pictured enjoying the first year of the event, said she hoped the event captured a similar excitement as Ascot

Determined to build on the success of the first year, she hosted the second event in May 2018 and said she ‘took a risk’ by moving venues.

‘The 2nd year was full of expectations and we took the risk of moving to another Hippodrome in Ciutadella at the other end of the island,’ she explained.

‘We were close to 1500 for the second edition with the numbers growing steadily from the year before as more people became aware of the event.’

Ahead of the event’s third year, which takes place in Palma de Mallorca on 26 October, Ariadna said she hoped the move in island would bring a new ‘personality’ to the race. 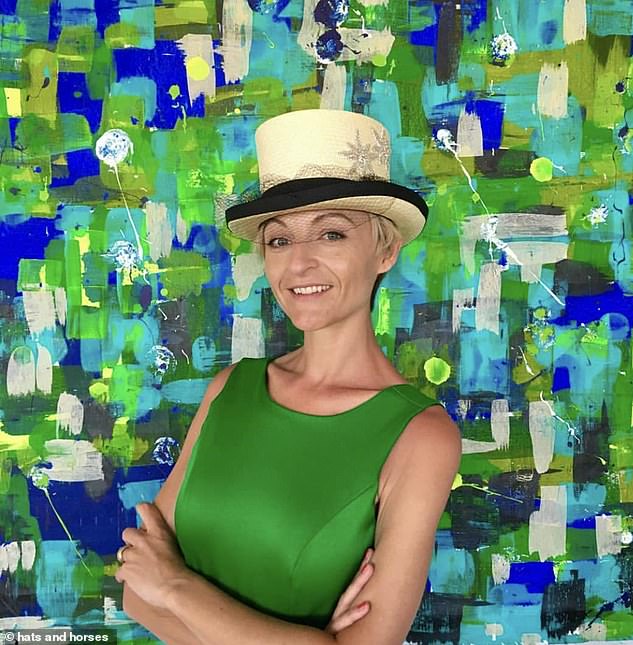 Ariadna went on to host the event for the second time in May 2018, having been inspired by her first trip to Ascot to make it bigger and better than before (pictured, at the second Hats and Horses event) 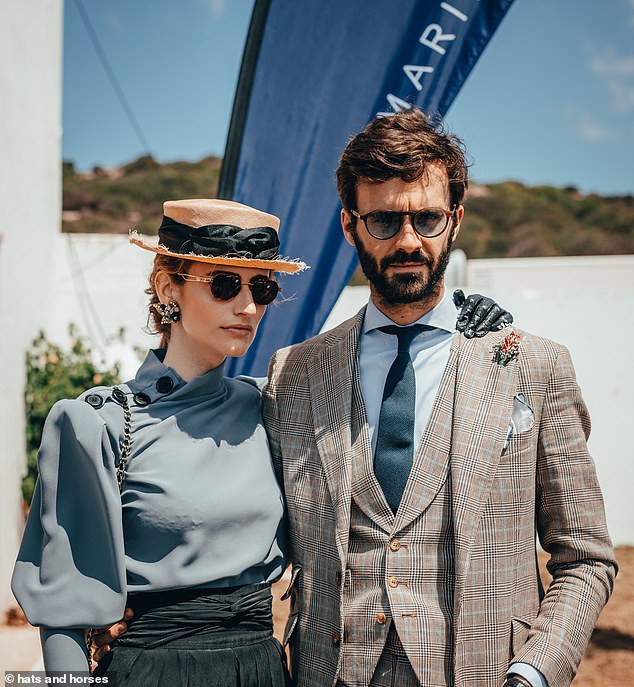 Ariadna said some men had been ‘ a little shy’ with their fashion in the first year, but by the second year, many adapted to the English style (pictured, one gentleman and female guest in dapper outfits at the event) 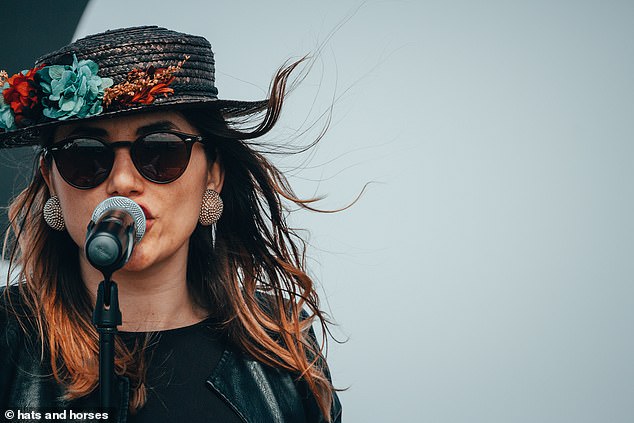 ‘The races are different in Mallorca and Menorca as they express their own personality through their own people, horses, with a special local breed and through the type of racing,’ she explained.

‘Mallorca has a very nice hippodrome and, nearby, you are able to enjoy the best beaches in the Mediterranean, with lots of excellent services, hotels, somehow, the Mallorca environment brings the idea of sea, summer, good weather… into the event.’

‘The fact that you can fly to Mallorca easily, go to the centre, find the best shops and brands, local products, high quality services and offer makes the idea to spend one weekend in Mallorca very appealing.’

And despite the tropical location, Ariadna said she was always keen to incorporate aspects of English culture into the event.

‘We try to do details referred to the English culture like Pimms in the aperitif for example, or the roast beef offered as part of the gastronomic delights available,’ she explained.

‘We try to fit the local products from Mallorca in the event to have the perfect combination between residents and tourists, which is the best way to know each other.’

She added that as well as the races, the Mallorca Hippodrome were preparing exhibitions of Classic Doma, a type of coordinated display of the horse being under close control of the rider, pony races and of course trotting.

Ariadna said she had high hopes the event would become one of ‘exceptional tradition’, explaining that the move from spring to autumn allowed for an escape from the ‘blustery and cold UK weather’. 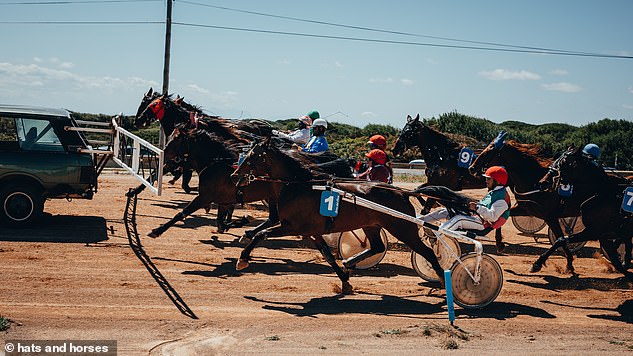 As well as the traditional races (pictured), the jockeys have prepared to perform a traditional Doma 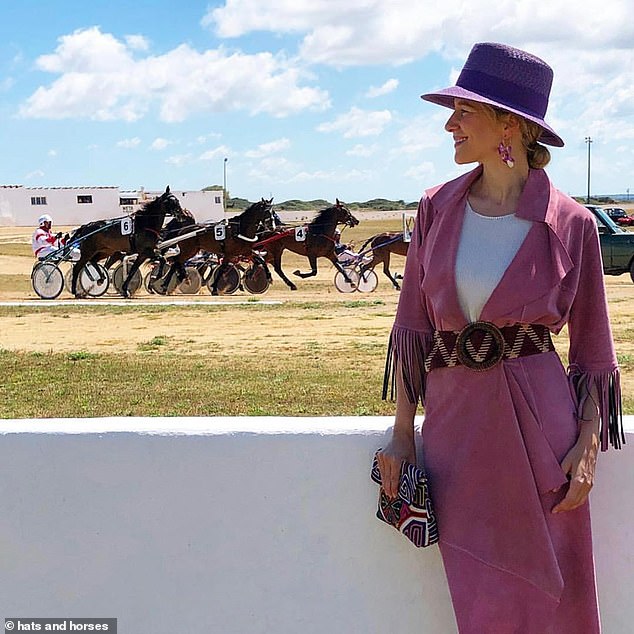 The founder said she hoped the event would allow Brits to get away from the ‘blustery and cold UK weather’ (pictured, one attendee enjoying the sun at last year’s event) 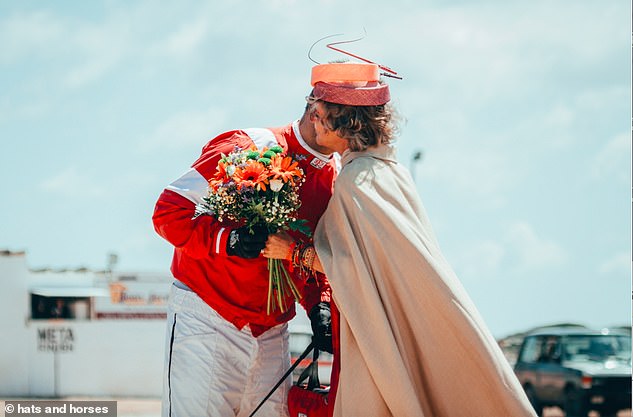 Guests are invited to bet on horse races, ahead of the presentation where the winner’s receive their prize before a party